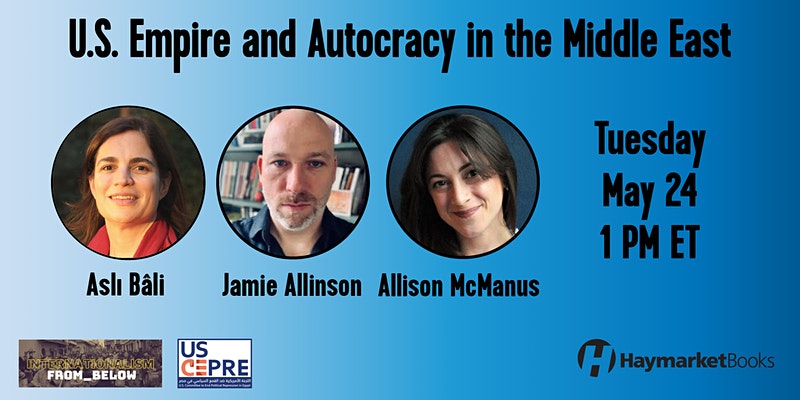 U.S. Empire and Autocracy in the Middle East

Join us for a discussion of the relation between US imperialism and its regional alliances in the Middle East.

The US empire relies on regional alliances with countries whose interests don’t always align 100% with US interests. This panel will focus on the regional alliance among Egypt, Saudi Arabia, the UAE, and Israel and their role as partners of US imperialism.

***Register through Eventbrite to receive a link to the video conference on the day of the event. This event will also be recorded and live captioning will be provided.***

Aslı Bâli is Professor of Law at the UCLA School of Law, Founding Faculty Director of the Promise Institute for Human Rights, and former Director of the UCLA Center for Near Eastern Studies. Her research focuses on public international law—including human rights and humanitarian law—and comparative constitutional law, with a focus on the Middle East. She co-chairs the Advisory Council for the Middle East and North Africa Division of Human Rights Watch and chairs the Middle East Studies Association Task Force on Civil and Human Rights and the MESA Global Academy.

Jamie Allinson is a senior lecturer in Politics and International Relations at the University of Edinburgh, Scotland, where he teaches courses in the politics of the Middle East. He is a member of the Salvage editorial collective and the author of The Age of Counter-Revolution: States and Revolutions in the Middle East (Cambridge University Press, 2022). His previous book, The Struggle for the State in Jordan: The Social Origins of Alliances in the Middle East (2016), was co-winner of the Jadaliyya Political Economy Book Prize.

Allison McManus is the research director of the Freedom Initiative, where she leads a team of researchers in documenting prison-related abuses and advocating for detainees in the Middle East and North Africa. She is also a member of the steering committee of the U.S. Committee to End Political Repression in Egypt. Previously she was research director of the Tahrir Institute for Middle East Policy.

Joel Beinin is a member of the steering committee of the U.S. Committee to End Political Repression in Egypt. He is Donald J. McLachlan Professor of History and Professor of Middle East History, Emeritus at Stanford University. His many books include Workers and Peasants in the Modern Middle East (2001) and Workers and Thieves: Labor Movements and Popular Uprisings in Tunisia and Egypt (2015).

This event is sponsored by the US Committee to End Political Repression in Egypt, Internationalism from Below, Middle East Research and Information Project (MERIP), Democracy for the Arab World Now (DAWN), The Freedom Initiative, DSA International Committee, and Haymarket Books. While all of our events are freely available, we ask that those who are able make a solidarity donation in support of our important organizing, programming and publishing work.